Sunday 28th October 2018 and F1 fans across the world watched Lewis Hamilton become a 5 times World Champion.  It’s quite an achievement and at times this year it really wasn’t looking at all certain.  I’ve written about Lewis several times and I’m sure many people will be writing about him now and highlighting different aspects of his story.

There’s a couple that I’d like to talk about.

Pick almost any interview with Lewis over the last couple of years and you’ll hear him talk about ‘we win together and we lose together’.  He’s very aware of all the people it has taken to achieve his success and he credits their part in his journey often.  From the commitment of his family in the early days, particularly his dad, giving him the opportunities to race at an early age, all the way through to the massive mighty Mercedes team that he works with today and his army of fans.

We all have a success team behind us, and with us, every step of the way.  It may be a little smaller than Lewis’ but acknowledging the support we have and using it wisely will make our lives both easier and more rewarding.  Equally we are all part of the success team of those around us, whether we realise it or not.  We may be providing active and obvious help such as coaching, training or support.   Alternatively we may be unaware of playing this role for other’s.  Someone may be following your progress on social media, they may be inspired by watching your interactions with others in everyday situations such as the way you calmly dealt with a problem at work or maybe the way you reacted with a child or helped someone in need while out shopping.

How could you make more impact as part of someone’s success team today (whether they realise it or not)?

Another thing that has cropped up in post race interviews is that he’s always looking for ways to be better.  Having achieved his fourth world championship he said he hadn’t known how he was going to improve it but he’s been able to.  The goal for next year is to be even better still and he’s not sure yet where those next small changes are going to come from.  It’s those small increments that will push him to even greater skills, ability and success.

Lewis mentioned that this year his focus has been not only on his driving and training but also on how to be a better team member and a better son.  Did you catch that bit?  I wonder if it’s the all-round focus that has made all the difference this year, the fact that he’s not just been focused on the driving but also on being the best version of himself possible.

What really stunned me as I checked out his Instagram page was his profile. 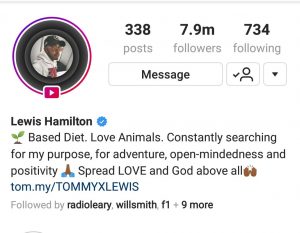 Which bit jumped out at me?

“constantly searching for my purpose, for adventure, open-mindedness and positivity”

As I sit writing this and drinking my coffee as I reflect on this comment it inspires me to realise that searching for your purpose can be an ongoing quest whatever heights you may have achieved.  This little snippet has helped me to realise that my purpose may not be readily apparent to me but also that it could be in a constant state of flux and that I’ll also be forever searching.  That being the case I’ll be in good company as it’s probably the same for us all!

Posted in Inspiration
← What do you actually do?Self-judgement Saturday →