I’ve heard a couple of times now that my clients worry that others will think that they are going crazy.  Is that because they are reaching for dreams that others think are impossible?  Because they are making radical changes to their lives?  Well maybe it’s those as well but the one thing that makes me chuckle when I hear it is the number of them who tell me that they hear my voice in their heads when I’m not there.  How’s that for value for money from your coaching?! 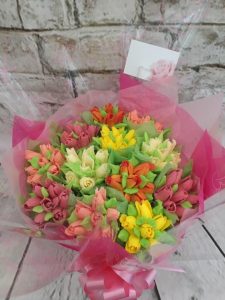 Today I had a catch-up with Julie so I could order some of her gorgeous cupcake bouquets and she upped the ante somewhat.  A couple of days ago she ended up having an argument with me in her head.  I’m pleased to say I won, and it worked out really well for her.

You see she was meeting a friend at a local café and she heard me (in her head) saying what a good opportunity it would be to take a bouquet and see if the café would be interested in stocking/selling them.  Her natural shyness argued not to but after a lengthy battle of wills she decided to do it.  The café said no but she handed out cards to at least five people in the café that day who were interested in buying from her.

So, not only do you get coaching from me when you are with me but also when you’ve gone home.  I like to think of this as carrying my cheerleading for you into your everyday life.  What fantastic value for money, a 24/7 life coach.

Now I can understand that hearing voices in your head might not be everyone’s cup of tea but…..if you’d like to give it a try book yourself an Introduction Session and see just how much value you can get from being coached by me.